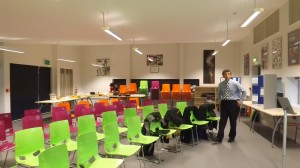 Our mission is the bridge the gap between school and the work place; these scholarships do that. applicant gain skills neede in their career feild and some even go on to work for the companies once leaving Budmouth.

Our mission is the bridge the gap between school and the work place; these scholarships do that. applicant gain skills neede in their career feild and some even go on to work for the companies once leaving Budmouth. 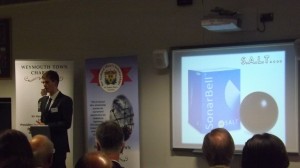 For new members of the Sixth Form at Budmouth, the Enrichment Fair is an important date to have in your calendar. An hour a week is set aside for enrichment to provide a break from lessons and studying (or coffee in Costa, depending on how you spend your free periods) to take part in some new experiences, pick up new skills and ultimately have fun!

The stand-out memory from my Enrichment Fair was the atmosphere: two hundred or so students eagerly reading the lists of offered opportunities, chatting with friends about what they thought sounded exciting and asking lots of questions. There were a whole range of different stalls set up in the Sixth Form Café, each promising a good experience and lots of fun.

Fortunately, lists had been sent to the tutor rooms so I had a vague idea of what type of activity I wanted to sign up to. After seeing some dire statistics about graduates with few job opportunities and the sheer number of people applying for every job opening in the country, I knew I wanted to do something that would give me new experiences and enhance my CV.

The two options I seriously considered were work experience and the CEIL. Both offered to teach me skills I knew were important to learn, so I considered the environment which I would feel more comfortable working in. Would going straight into work be more beneficial, or trying a variety of project-based work in a semi-familiar environment?

Eventually, I decided on the CEIL, because I thought the one-on-one experiences and guidance offered would be most helpful to me personally. Thankfully, now I’m sure I’ve made the right choice! Since joining the CEIL, I think there has been a noticeable improvement in my self-confidence. I have learnt skills such as answering the telephone and transferring the calls and I am getting better at recognising the skills that I use in different situations. After learning so much in only two months, I’m happily anticipating the next few months of my membership.

Interns who’ve recently joined have been getting training on the phone, such as how to transfer a call. At the start many of them are nervous even picking the phone up, but thankfully by the end of their training they’ve answered calls.  Although mainly from Penny- the communication working within the CEIL’s office- the interns learnt that it’s actually easy and stress free to answer the phone and transfer calls.

I wish interns from last year had something like this when they joined.  Although I’ve been an intern at CEIL for over a year now, I’m not 100% confident of answering the phone. Perhaps starting early and exposing them to the stress will give them skills that are needed in any work place.

‘I was lucky enough to spend four weeks at the marine engineering company S.A.L.T. (Subsea Asset Location Technology) during the summer just past between Monday August 5th and Friday 30th 2013. From the very beginning they were very keen to lay out a plan that would not only give my stay a benefit for them but be a worthwhile experience for me.

I met with Carl Tiltman the CEO and Penny Symes prior to my starting and they really helped to fill me in on their company and we discussed my future plans and how they could help me develop not only as an engineer but as  competent member of a company/group. With them having taken such a forward interest in what I wanted to get out of the time with them I feel that it was much more rewarding than it could have been.

On arrival I had my own desk with the CAD software Autodesk Inventor; at school we use Solid Works so it was a learning curve but definitely a worthwhile one. It is one of the practical skills that I will be able to transfer between future employers. My tasks set to be complete over the four weeks were half based simply to give me taste of the business in general and the other was actual work for them. It was a good balance because just being in the relatively small office gives you a taste of everything that has to go on in order to be successful.

The value of the experience gained is extremely high as it comes at a very important time in my
school career. The advice from the other guys in the office was also very helpful as they offered a varied base of opinion and background to their advice.

It wasn’t all work when I was there and I was lucky enough to be there for the 5th anniversary party which was a fun night with an extremely amusing quiz. Getting to know all involved at S.A.L.T. was a pleasure, having a wide variety of ages in the office is refreshing and it was great when a spontaneous discussion over buoyancy becomes rather heated focused on the ability for a small dinghy to hold a small car.

Something that really caught my attention and interest was 3D printing, I was lucky enough to have a go at making a few parts with mixed success. My last project focused around making a desk model, the parts were all manufactured in the 3D printer. There were a lot of things to consider but it was very exciting and a great experience. My focus was on the CAD side of things so making and modifying all of the parts was very enjoyable for me and really highlighted my enjoyment of that side of the engineering world.

Overall I feel my time at S.A.L.T. was extremely well spent, with the guidance of Penny and Lisa and a hand from Carl I feel as though I can go on and really make the most of the experiences gained with the company. It’s not just a CV filler but one of the first genuine stepping stones on my way to an engineering career. I would like to thank again everyone involved in bringing me to S.A.L.T. and I hope our paths will cross again.’

To find out more click on the link: http://www.cesalt.co.uk/ 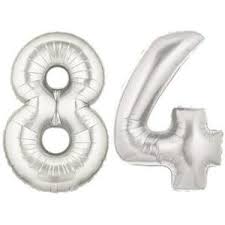 On Wesnesday 18th September, a group of six interns including myself were asked to help promote and encourage year 12’s to join the Centre of Excellence. Our sixthform cafe was opned up to all sixth formers and enrichment activies from water sports to film club to CEIL. we had a display in a corner and a silver ’84’ balloon to draw attention. Each intern that helped gave out vouchers for an ‘All Access Week’ to make sure student that wanted to try the Centre could get what they wanted from it.

Why 84? We chose this number to represent the number of other applicants for any graduate job.

Budmouth started back last week, meaning the CEIL also reopened. Years 12 have been enrolling and Year 13’s re-enrolling. Our existing interns have been showing the new interns around the Centre including the 9 Zones:

Here at Budmouth, like other secondary schools, have just over a week left before summer holidays. We’ve been saying bye to interns that have gone but welcoming year 11s who hopefully will join the CEIL.

Recently, nearby schools have been visiting the Centre and possibly gaining ideas and enthusiasm to how they can create something similar in their schools. Mondday 8th July, the Ceil showed round 5 teachers from Fern down the CEIL. I was lucky enough, you could say, to give them an hour tour of our facilities alongside a fellow intern.

Our tour began on the stairwell below where we described the significant of be a part of the school building but separate from its requirement to be there; as the CEIL is a place students go because they want to better themselves and gain skills rather just earn education. We then gave a quick tour of that floor’s space by showing them the study rooms that used to be used as language rooms before the Hub. As they yet to have a tour of the whole school we paused one set up, allowing them to look at and ask us questions about posters and mouths that line the walls. We discussed how our sponsors believe in the CEIL and how they offer help. Such as ‘writing combinations’ that come to meetings about our blog and twitter page. After that we explained the ‘zone system’. I said how these ‘zones’ are relatable to business’ because enterprises’ for example, Apple have something similar. Their tour finished in the conference room which both of us stating how the CEIL has helped me.

“Without CEIL almost pushing me in to uncomfortable situations I would never experience and develop my confidence when talking to a large group of people.”

Mental landscaping- Fiona Sutherland.
On Wednesday 12th June the CEIL opened its conference room up for an exposure lecture; this lecture was led by Fiona Sutherland a life coach who specialises in thought pattern management. Her goal was to get us, the participants, to try something new and resolve any issue we have. She and fellow psychologist found there was a link between our environment and language patterns; they discovered the mental landscape bridged that gap. Fiona mentioned our mental landscape is affected by our memories and past.

Mental landscaping involved finding something difficult and imagining where it is in your environment, and then trying to move it somewhere it feels more comfortable. For me, I have a difficultly gathering the energy to do my coursework at times and later found I didn’t like this behind me (which is where I imagined it to be).  So I rolled it round to my right and got it to stay by nailing it in place.

Hopefully this lecture will help my enthusiasm when it comes to coursework and solving future
problems.

It has come to the end of my AS levels and we only have 4 months until we have to apply for university so like many other students who use the Centre, I began looking into courses and places. I narrowed my options down to Fine art and Art history, I then picked Plymouth, Reading and Exeter after much research. We booked open days for this month.

Yesterday, my parents and I visited Exeter University for their open day. Our journey took longer than anticipated therefore we just managed to get to my talk about Art history and visual culture. The two teachers presenting the talk showed their passion, which made it more inspirational. I was unsure on the course as I knew it didn’t involve practical work but found out Exeter had a Fine art society, that would allow me to paint and draw for the university.

We then joined a tour of the campus. We were able to ask our tour guide questions about move away from home as she herself was a first year student. The grounds were beautiful; trees and flowers sprouted everywhere, the old buildings complimented the new ones. We finally finished the day by looking into the university on campus halls, which showed tidy rooms with their own en-suite bathrooms and a shared kitchen/lounge.

I wasn’t sure if I even wanted to go to uni, although I’m still not 100% convinced; I’ve kept an open mind and know if I want to go maybe a year later, I can show them what I have done with the CEIL which will prove to be something extra than other candidates can offer.